Poverty and exclusion of the grandparents’ generation 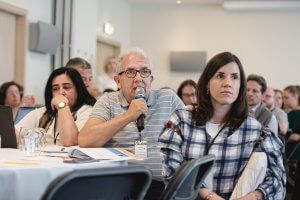 The 16th FEAD Network meeting took place on 4-5th June 2019 in Vilnius and discussed issues related to “Tackling Poverty and Social Exclusion of Older People through FEAD Initiatives”. Parents International was represented by Herminio Correa, member of our Supervisory Board in order to raise the voice of parents and grandparents at the event.

Europe has the oldest and most rapidly ageing population of any continent in the world. It is expected that between 2016 and 2060, the proportion of older people in Europe (those over 65) will rise from 19.3 % to 29 % of the total population. In light of this, the EU has acknowledged the need to address this new reality through a range of measures focused on active and healthy ageing. These initiatives focus on facilitating the full participation of older people in society by tailoring public services to their needs. In the context of the Europe 2020 strategy target of reducing poverty in the EU, the specific focus is on the 18.2 % of the most vulnerable older people at risk of poverty and social exclusion in the EU.

The general perception has been that older people were the most protected age group in relation to the consequences of the 2008 economic crisis. This is corroborated by the lowest and continually decreasing at risk of poverty and social exclusion rates (AROPE) for older people between 2008 and 2017, presented in table below and compared by age category. More specifically, in 2017, people over the age of 65 were at lower risk of poverty or social exclusion compared with the overall population (only 18 % of older people, compared with 22.4 % of the whole population).

To measure poverty and social exclusion, EU statistics use a composed indicator, the AROPE rate. This estimates the proportion of people who are either at risk of poverty, severely materially deprived, or live in a household with a very low work intensity. The AROPE rate does not, however, consider factors that are particular to older people and could increase the risk of poverty and social exclusion, which include poor health, age-based discrimination, isolation, abuse, and reduced mental and physical capacity.

Besides additional factors that should be considered when measuring AROPE rates for older people, it should be noted that these positive average trends mask significant differences in terms of Member States, gender and the structure of poverty.

Firstly, it is important to note that the structure of poverty has changed, with the material deprivation rate decreasing, and the at risk of poverty rate increasing. The 65+ demographic experiences in-work poverty less frequently, with a rate of 6.9 % in 2016, but this is expected to rise due to new employment models, which will have an impact on the level of pensions. For example, in 2017, the average risk of poverty among older people in Spain and Greece was 9 percentage points (pp) lower than for the rest of the population. On the other hand, the share of the older population at risk of poverty was significantly higher than for the rest of the population in Estonia (+18.6 pp), Latvia (+15.7 pp), Lithuania (+10.7 pp) and Bulgaria (+10.0 pp).10 These differences among EU Member States have different causes, but two in particular could be highlighted: the characteristics of pension systems and safety family networks, and the age and gender structure of the older population.

Research has identified certain effects and characteristics that contribute to higher rates of poverty and social exclusion among older people:

Finally, the general perception that older people are at a lower risk of poverty compared to other age groups could be explained by several factors. In general, older people are income-poor, but usually hold some types of assets, mostly properties in which they live. However, the value of properties is difficult to estimate, and despite not paying rent, older people still need to bear high maintenance and repair costs. Additionally, they might live in housing that is too large for one or two people, entailing higher energy costs.

In terms of factors to help combat poverty and exclusion in older age, survivors’ pensions, which are welfare benefits paid to a deceased person’s relatives (such as a spouse and/or children), are one of the main mechanisms safeguarding women from old age poverty. These pensions compensate women for their lower pensions and can therefore help to bridge the pension gender gap.

Then Auksé Duksiene, FEAD Programme Manager within the Ministry of Social Security and Labour presented the FEAD project in Lithuania.

Hans Dubois – Research Manager in the Social Policies unit of Eurofound, who presented the current status and main trends of poverty and social exclusion among older people in Europe.

Maciej Kucharczyk – Policy Director for AGE Platform who spoke about developments in and the relevance of poverty and social exclusion of older people.

Paula Cruz – Sociologist at EAPN, who spoked about the experiences of socially excluded older people who live alone.

Grazina Rapoliene – Research Fellow at the Lithuanian Social Research Center who presented the current status and trends of older people in Lithuania.

“Bethany” Social Center of the Vilnius Archdiocese Caritas provides a place for people to gather and socialise offering them empowerment and encouragement to make positive changes in their lives. “Bethany” welcomes not only those in need of social assistance (by providing advice, food, clothes. etc.) but also those who want to volunteer to help their fellow citizens.

“Bethany” center acts as a charity canteen, day center and hygiene room. In the center, people who live in social exclusion, poverty or experience a crisis can get free daily warm, fresh food produced in the center’s canteen. They can use the hygiene room and get clean clothes. The center also organises afternoon activities. “Bethany” center provides a safe, warm, private space for people who usually spend the day on the streets.

“Bethany” center receives products from the Food Bank – Maisto Bankas, including FEAD food which was not taken by FEAD end recipients.

To learn more about the project, visit www.betanija.

In parallel to this center there is a Day Center for Young People with problems. Some of them attend this center as an alternative to prison sentences, and others have just served prison sentences. There are also those who have been referred by their school for absenteeism or abandonment and who has been referred by their parents, since they could not do anything of them. Currently there are 10 young people in the center: 7 boys and 3 girls. The Center works with them on social and personal skills and gives them professional training so that they can return to “normal” life with the necessary tools to get them a job and to be self-sufficient.

Case study 2: Greece – “Solidarity in the Drama Region” social partnership – helping older people by Anastasia Stergiopoulou from the Legal Entity of the Municipality of Drama.

The next meeting will be held on 20 September 2019 in Brussels.

Lifelong learning for the community

CEDEFOP, the vocational education agency of the European Union organised an interesting event entitled What role for community lifelong learning centres? – The potential of one-stop shops for preventing youth at risk from disconnecting. The event was organised in cooperation with the Lifelong Learning Platform (LLL-P) as they have published a policy paper on community lifelong learning centres. Our Director was involved in drafting this document and thus participated at the event. The main discussion point was if these centres should primarily be built on schools. This is our standpoint, emphasising that there is a responsibility of professional educators working there for lifelong learning of local community members. While everybody agreed that other venues should also be considered depending on local needs, the majority of participants share our view on this.

According to CEDEFOP, Community lifelong learning centres should provide a welcoming, non-threatening education environment centred on learners’ needs. They typically focus is on non-formal education but can combine both non-formal and formal education approaches. As part of a community outreach approach, such centres are accessible to the local community, both in terms of physical proximity and as places where learners – including marginalised and minority group learners – feel they belong. Learning is learner-centred, starting at each learner’s current level and aiming to engage with their life experiences. Such outreach approaches, building on strengths, seek to engage learners who may feel alienated from formal education and from society in general. Some of these centres employ staff from the local community and involve local groups in their management board.

Viewing community lifelong learning centres as a gateway to multidisciplinary-teams-based services for those with complex needs, presupposes a collocation between these centres and the teams, as part of a one-stop shop. Of the wider groups attending community lifelong learning classes, a smaller number of marginalised young people and adults will have more complex needs, such as mental health issues, trauma difficulties, experience of domestic violence, bullying, abuse, etc. These community-based centres offer a vital opportunity to engage such individuals with services meeting their needs, in an environment where they already feel at ease and have a sense of belonging.

The forum was an opportunity for participants to discuss Member State experiences using integrated service delivery (one-stop shops, case management and multi-skilled teams) in different settings. Participants discussed the potential for establishing CLLCs in disadvantaged areas across Europe. These could offer people of all ages access to a wider range of learning opportunities, maximising the support offered by multidisciplinary teams. Participants were also invited to reflect on the post-2020 agenda in the field to ensure continued progress towards improving EU citizens’ qualifications and skills.