The European Alliance for Apprenticeships (EAfA) organised a study visit in Prague on 21-22 May 2019. The co-host was the Czech Chamber of Commerce. The theme of the meeting was the role of chambers in apprenticeships. The wonderful milieu of the old town Prague sparked interesting thoughts on the first day, while on the second day we had the opportunity to travel to Mlada Boleslav and visit the Skoda Academy.

The Czech Republic has not yet re-introduced the dual system in vocational education that was prevalent before the second world war. The Chamber of Commerce is lobbying heavily for apprenticeships as a modern form of vocational training, and the event was a step towards this.

Apart from interesting panel discussions involving various stakeholder representatives, there was a possibility to visit some of the most modern vocational training venues including robotics labs at the Czech Institute of Informatics, Robotics and Cybernetics, a IT vocational school in the city centre, Smichov and the Skoda Academy where they offer both traditional vocational education in professions related to car manufacturing from car mechanic to logistics or marketing experts, and adult learning/further education for Skoda employees.

In the Czech Republic there is a need to improve the quality and parallel with it the attractiveness of vocational education making it a first choice that is also the foundation for those who decide to change to academic pathways later on. They have made some improvement. We were told that from the IT school we visited the majority of students go on to university.

We have also learned about the scheme Skoda offers to their students to support transition from school to work. All their graduates are automatically entitled to have a first job at Skoda, so even if they decide to continue their studies at university, they are employed after graduation.

Skoda Academy also showed interest in piloting the parental engagement tools and training we are developing as part of our EAfA Pledge.

Let Them Learn through Play

We were invited to the 1st International True Play Conference and to become a founding member of the True Play Advocacy Alliance. The event brought together nearly 300 experts and was hosted by Anji Play, a revolutionary initiative in China promoting what they call true play. During the week spent in Anji County we visited several kindergartens implementing the true play curriculum, participated at the conference with leading scholars in the field and learnt how they engage the parents in all Anji Play activities. 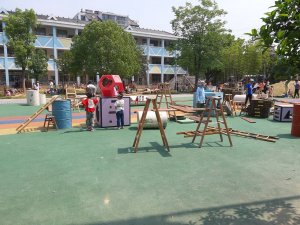 True play kindergartens are revolutionary in China where play in any form is not a regular part of daily kindergarten life. This is true for most of the Far East, but colleagues from the USA also said that play is less and less part of their pre-schools, and there are some similar experiences from a number of European countries. The Anji approach goes beyond what is usually experienced as play in kindergartens as it lets the children take the lead and  offers a lot of material – much of it would be considered dangerous by national standards in the USA or in the EU – to create their own play spaces with water, sand, paint, ladders, planks, barrels, etc. The programme is based on five principles: Love, Risk/Adventure, Joy, Engagement and Reflection. Children have amazing learning outcomes, closely followed by teachers who do not interfere with the learning being observers only. They are way ahead of their peers attending regular kindergartens – that are highly academic in China.

For success they had to win the parents, too. They started by opening up kindergartens: parents can come anytime to 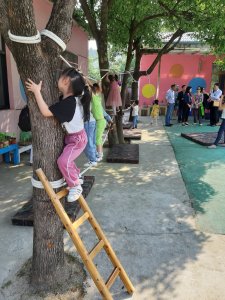 personally experience what their children do and enjoy there. Parents can come to the kindergarten to play with their children there, too. They also provide a parent academy as well as individual discussions with parents. These are used to analysing photos and videos of their own children with the teachers. When new material is introduced in the kindergarten or rearrangements are planned, parents are engaged in decision-making. By this they have managed to convince parents of the importance of play and that the “risky” play forming the basis of the programme is not harmful for their children. As preparation for kindergarten they also invite parents of children aged 0 to 3 to the kindergarten a few times per semester and they also offer possibilities for them to bring their toddlers in.

True play kindergartens are also truly inclusive. It is not only that they offer children with special education needs to attend together with all other children, but equity and inclusion are part of the true play philosophy. Children on the autism spectrum for example often leave kindergarten in much better condition that they enter. They also have a high number of success stories with children with restricted movements or speech abilities. The whole methodology is based on observing the child, reflecting on the observations and providing for the need of that individual child. Even the spaces are formed according to children’s needs, based on observation and thus spaces are not created by an architect or the kindergarten head. 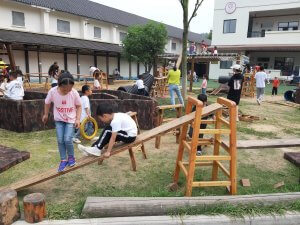 At the moment, they are trying to change teachers’ and school heads’ mindsets to introduce play in primary schools. Primary teachers often say that Anji children enter school with much higher level skills that others, they thrive at the beginning of school, but they underperform after some time not being used to the top-down approach of schools. As teachers/school heads visit the Anji kindergartens they can observe the learning taking place there. They also visit primary schools to show how the approach could be introduced, and they also discuss teachers’ concerns. They would like to see small steps in school, for example the introduction of timetables that suit children better. In Anji kindergartens there are books everywhere. They would like to see them in schools, too, as well as more engaging material. Primary teachers feel the need for change, so hopefully it will happen over time.

During the conference we had the opportunity to listen to a large number of leading experts from all over the world as well as to statements by kindergarten heads who have taken the Anji Play journey. This space does not make it possible to give a full report. It will hopefully be available on the conference website http://www.anjiplay.com/trueplay2019 soon. This is just a short recap of some messages that target parents directly. 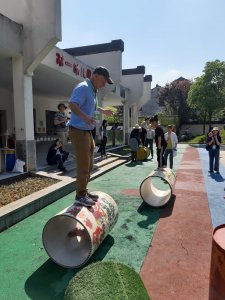 play. He also recalled that if children are measured against pre-set expectations, it  often leads to considering them as failure. Reflecting on risky play he emphasised that safety and risk are not opposites, you need to feel safe in order to take risks. Parents and other educators often worry a lot out of care, but we need to remember that the opposite of worry is not calm serenity, but trust (in relationships, in resilience, in children’s abilities). He called for parents and schools to offer opportunities for taking risks. He highlighted that a child will recover more from a broken arm than being timid. He called for strong adult leadership to make this kind of learning a reality for all children. This includes school leadership for changing parents’ attitudes and for inclusion.

David Whitebread, the recently retired director of PEDAL Cambridge reminded everybody that risky play is crucial in developing resilience, self-reliance, learning to manage risk, but also for well-being and mental health. His message for parents who try to organise ‘meaningful activities’ for all moments of their children’s time spent awake is that less structured time leads to much better self-regulation, so you should be brave not to supervise your child all the time and offer them much more unstructured time. Don’t worry about them being bored.

His message was also underlined by other speakers. Frances Rust called all educators – and parents as the primary of them – to aim at enculturing children and young generations for a knowledge-building civilisation. We need to re-define the aim of formal education for this and focus on enabling the learner to develop autonomy.

As a founding member of the True Play Advocacy Alliance our message to parents and professional educators is the following: 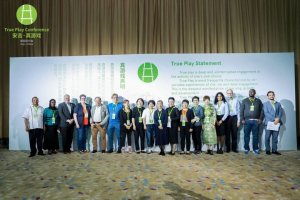 The play revolution that would end this abuse needs convinced and convincing professionals that are trusted by the parents and can then create a partnership with professionals making parents understand that play is education and they can only stop being abusive by letting their children play truly.

So, parents are the key – it may not come as a surprise from Parents International -, but professionals have a major responsibility in supporting them. Just like Anji Play is doing it.

All photos were taken with permission of parents and the children themselves.